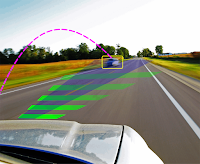 They are coming to a street near you…faster than you may realize. "They" are driverless cars: cars that drive themselves with little or no human intervention. There are certainly many potential benefits associated with driverless cars, but there is also huge uncertainty whether people will fear or embrace them. The way society responds to the driverless cars will have numerous ramifications on urban design and car parking.
One scenario for the future is that shared or "pooled" driverless cars reduce the total number of cars on the road. Imagine opening an app on your smartphone and, in less than a minute or two, having a driverless car waiting to take you wherever you want to go. Reducing the number of cars means less space needed for car parking. However, before urban planners start considering which parking facilities to tear down, it might be best to see whether driverless cars actually do lead to a reduction in the number of cars. There are a number of interesting alternative scenarios and issues to consider.
Privately owned driverless cars, like today's cars, will require parking spaces...somewhere. However, a curious phenomenon might occur with driverless cars. Rather than putting a car into some distant parking space, there will be temptation to have a driverless car circle the block repeatedly while the owner goes shopping or to work. Imagine the traffic nightmare that would result when just a few dozen people do this.

Another scenario suggests the popularity of driverless cars will increase the number of cars on the road as well as the number of miles driven. Suppose it becomes affordable and convenient for the average family to have driverless car for each adult and child. Individual driverless cars could take each child to and from a different school, to sports, to after-school and weekend events without bothering the parents. Fourteen-year old Mary can have her driverless car take her wherever she wants, whenever she wants. Where will all of the extra cars be parked?

Driverless cars may also make it convenient for people to commute longer distances or for more people to live in the suburbs and commute to jobs in urban centers. This raises the question of what effect driverless cars might have on public transportation and mass transit. This potential scenario has driverless cars increasing the number of cars on the road…and requiring more parking spaces.

Even in the shared or "pooled" scenario, driverless cars will require parking spaces. There would be a very high peak demand for driverless cars in mornings and evenings. That demand reduces substantially during the evening and overnight hours. Driverless cars not needed during off-peak hours have to be parked somewhere since driving them around empty all night would not be feasible. Moreover, Peter F. Sweatman, Director of the University of Michigan’s Transportation Research Institute, suggests the concept of shared driverless cars may not easily happen: “If it’s a purely societal benefit, it ain’t gonna happen. This will only happen by being highly attractive to consumers.”

Posted by ladinacaluori at 10:46 AM No comments: